Sefton Manor 2nd September by The Wild Rose Press. It's still one of my favourites, heck, I think it will always be. 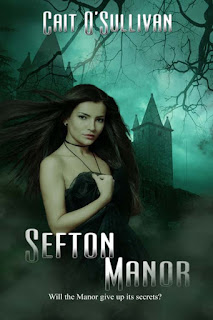 Sefton Manor, a country house that has somehow withstood the ravages of time, holds the key to Martha Kendall's dysfunctional family.

Asked by her grandmother to uncover the truth about her missing Aunt, Martha comes to Buckhurst Village and starts to ask questions. Questions that lead her to Will Fellowes, a famous musician whose family tended the grounds of Sefton Manor for centuries.

Amidst whispers of pacts with the Devil, they pair up to wrestle the secret from the house and their growing feelings for each other.


Sefton Manor was my first foray into Gothic writing and I loved it. I started my career in the romance genre--Romancing the Seas being my first baby and one conceived as my ill-fated marriage fell apart around me. A couple more romances followed, and then I decided to marry my loves--literary (As opposed to literally!): Gothic,  romance and fantasy.

A romance theme that has always fascinated me is love throughout the ages. If a love has not been fulfilled in one lifetime, it will emerge in another until satisfied.

The fantasy emerges in the way the story end (only kidding, I'm not twitter and bisted ;) ). Fantasy in the way Martha and Will deal with Sefton Manor.

Check it out, you won't be disappointed!