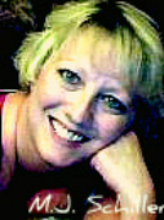 Dear all, I'm thrilled to have indie publisher, MJ Schiller back on my blog. Today she's talking about Trapped Under Ice, a fantastic read which will keep you turning those pages -- once you manage to tear your eyes away from the cover that is :). Trapped Under Ice hit the top 100 Romantic Suspense list on Amazon yesterday too -- how exciting is that. Big congrats, Ms Schiller!!

First of all, thanks for having me back, Cait! Thanks for coming by, MJ :).

I had a choice of writing a guest blog or answering interview questions. At this point, I’ve done scads of interviews and a lot of the questions are the same. And I’ve been on Cait’s Place before, so you think I would have exhausted all possibilities for questions, but she has such great questions, I had to go that route again. Aw thanks, MJ!

But first, let me give you a short blurb of my latest romance, TRAPPED UNDER ICE. 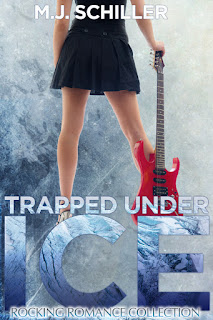 Rock star Chad Evans’s tortured past hides just beneath the surface. Even fans screaming out his name in ecstasy can’t drown out the screams of his childhood. He can usually keep it under control, but not always. Tonight the alcohol doesn’t seem to soothe.
Part of the crowd, Beth Donovan smiles, really enjoying herself for a change. But her smile isn’t usually this bright. It is the kind of smile that masks sorrow.  Three years just isn’t long enough to get over losing Paul.
When a vicious attack behind stage brings this unlikely pair together, something changes inside of them both. But can a jet-setting superstar and a Midwestern lunch lady ever manage a real relationship? And even if they can, will the person sending Chad death threats take it all away? Or is it their fate to remain forever trapped under ice?

Now, here are the questions:

1.       Do you have any writing quirks and if so, what are they? Apparently I make faces when I write, according to my kids. I dispute this claim. hah, I do too, in fact even just texting or emailing someone, I make a face.

2.       If you were told that you couldn’t write in any medium anymore otherwise the world would blow up, what would you do? Well, it would be pretty selfish for me to write in that case so I guess I would save the world and call it a day. Phew MJ, thanks for that :). We live to write another day.
3.       If you knew that no-one would ever read your writing, would you or would you not still write and why? Be honest! Probably. The characters HAVE to exist on paper once they exist in your mind. Good way of putting it.
4.       What is your favourite word, and why? Righteous. I never use it, but I love to say it because it is sort of onomatopoetic. In other words, when you say righteous, it sounds righteous. Awesome word! I have to say, this was not what I expected from you -- righteous. Although I know what you mean re the onomatopoeia though.

5.       When and why was the last time you giggled uncontrollably? About 15 seconds ago, watching Cinema Sins-Twilight. They catch all of the goofs in the movie, like this guy has a vest on in the scene, then he doesn’t and he hasn’t taken it off. Amazing what they pick up! They also poke fun at the movie at the same time.

6.        Desert Island question – I know, it had to be here – so you know you’re about to be banished to a desert island for ten years. There will just about be enough food and water for one person, but nothing nada zero zip else. You can make one wish – what is it?  Okay, this is gonna sound corny, but I’d wish for my husband. Wait! That’s kind of selfish because then he would have to be stranded on a desert island, too. And besides, he’d eat the food. How about a Kindle that would remain forever charged? (By the way, I’d rather be stranded on a deSSert island. More fun.) lol lots more fun. I like the way you think!

8.       If you had to choose between love and sex for the rest of your life, which would it be? Love without sex? Painful. Sex without love? Unacceptable. Great answer and nicely put, would expect no less from the author of Trapped Under Ice.

Now, for a taste of TRAPPED UNDER ICE:
For the first time, the pair was alone with no ready subject for conversation. They both took a sip of their drinks to stall for time.
“Your drink all right?”
“Good, good.” She nodded.
“Good,” he repeated, seeming at a loss as to where to go next. He exhaled with a laugh. “You know, I don’t know anything about you, other than your name is Beth, you have a daughter named Cassie, and you’re one hell of a singer.”
“Ah…well...” Again she was unnerved by the praise.
“You’re staying at this hotel, so you’re not from here. Where do you live?”
“Bloomington, Illinois.” When he stared at her blankly, she added, “It’s about halfway between here and Chicago.”
He nodded. “What’s it like?”
“Well…it’s a college town. In fact, we have the little known distinction of being the only city with a university at either end of the same street,” she threw in, remembering seeing that in a paper Cassie did for social studies.
“I see,” he replied, bemused. “And what do you do in this fair city? I mean,” he back-pedaled, “do you work outside of the home?”
“Ah, so politically correct. Yes, as a matter of fact, I’m a lunch lady.”
The singer looked for a minute like he was going to spit out his drink, but he swallowed hurriedly and laughed.
“What?” Beth retorted, pretending to be hurt. “You’ve got something against lunch ladies, I suppose?”
“No, no,” he insisted. “It’s just…you don’t look like any lunch lady I ever had.”
She took a long drink and considered his words. Was there a compliment in there somewhere?
“So how did you land this lunch lady gig?”
Now it was Beth’s turn to laugh at his choice of the word “gig.” “Well, in truth it wasn’t all that difficult. I just showed up for the interview, they told me what the hours were, how much it paid, and what it entailed, then asked me if I wanted the job. So, hearing what glamorous duties I was to have and what a fabulous paycheck I would be bringing home, I, of course, took it.” He laughed. “No, really, I love my job. I love working with kids. I can come home and take a nap every afternoon before Cas gets home from school. What’s not to like?”
“Well, when you put it that way...”
“Not to mention, sometimes I get to bring home leftover sloppy joe meat.”
“It gets better and better. Sign me up.”
“Oh yeah. ‘Cause this whole rock star thing can’t compare to the wonderful benefits I just described. Tell me the truth, it was the sloppy joe meat that really sold you, wasn’t it?”

I know you're hooked now, aren't you? Head on over to the below links and snap up your copy fast, you won't be disappointed.

TRAPPED UNDER ICE available at Amazon, BN.com, Smashwords, Kobo, the I-bookstore, Diesel, and other ebook retailers.