Gothic? Pop by Pat McDermott's wonderfully named Across the Plain of Shining Books  blog to see why I love this genre so very much. 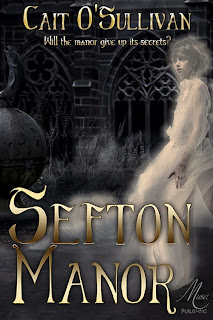 Cait O’Sullivan takes us to England and Ireland for a double dose of romance with a Gothic/Horror twist in this exciting pair of novellas. Welcome to The Plain, Cait. Tell us how these fabulous stories came to be.

Big thanks, Pat, for having me here today. I really appreciate the chance to be on your wonderful blog.

I fell in love with Gothic literature when I was at Uni as a mature student, studying English with Creative Writing. The delicious creepiness of Henry James’ The Turn of the Screw had me reading long after lights out but unable to sleep until dawn crept in the window. Frankenstein by Mary Shelley was a much studied text, not least because of the circumstances for which she wrote it; to win a bet against Lord Byron and her husband, Percy. They were staying in the Alps and decided to find out who could write the scariest story. You go girl!!

Gothic literature mashed up the then current genres in the late nineteenth century and threw in fantastical elements such as monstrous ghosts, strange-looking folk and whispers of devil related activities. All very fascinating at a time when belief in God was on the wane and immigration on the wax. Adventurers were travelling further and sending back recounts of unbelievable countries and peoples with barbaric customs.

So when I saw a call for submissions for a haunted house romance, I immediately thought of Turn of the Screw and I got myself to writing. And, boy, I had such fun. Fainting heroines, pacts with the devils, hearts under the willow tree, sexy musicians…what’s not to love? Sefton Manor was the result.

Sefton Manor, a country house that has somehow withstood the ravages of time, holds the key to Martha Kendall’s dysfunctional family. Asked by her grandmother to uncover the truth about her missing Aunt, Martha comes to Buckhurst Village. Despite unsettling occurrences upsetting her sensibilities, she starts asking questions.

Questions that lead her to Will Fellowes, a man whose family tended the grounds of Sefton Manor for centuries. Amidst whispers of pacts with the Devil, they pair up to wrestle the secret from the house.

Or will the house consume them all?

I couldn’t stop there though. Sefton Manor is set in England, where I currently reside. But the Burren, at home in Ireland, just kept on knocking at the door of my mind. This national park on the west coast of Ireland is home to a great landscape, the closest to a moonscape I could ever imagine. Karst limestone stretches for miles, witness to the many struggles of the Irish to coax a living from the soil. Obviously unsuccessful, their suffering soaking into the land and I feel it’s this which gives one of the haunting aspect to the bleak but beautiful Burren. The Poulnabrone Tomb dates back to Neolithic times and has twenty five adults and children buried underneath. So really, it would’ve been rude not to write a story based there. 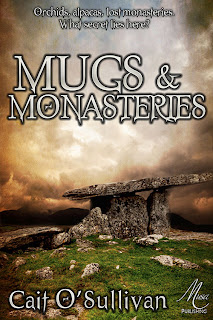 Soon enough, I settled into a story about a ruined monastery that only appears every so often, an orchid hunter and an alpaca farmer. So Mugs & Monasteries was born.

When orchid hunter, Evie Bourke stumbles across a near deserted monastery deep in the Burren, she has no idea she’s the first person alive to have seen it. All she knows is that life went a bit strange and was getting more bizarre by the minute.

Meeting alpaca farmer Aiden Dunne over a pint of Guinness, she is struck by his resemblance, yet to whom, she can’t quite remember. Aiden is searching for Munster Abbey for his family was connected to it for generations, culminating in the disappearance of his relative, the then Prior.

What happened all those years ago? Who or what is ‘the Wanderer’ and, more to the point, what does he want?

I hope you like it as much as I loved writing it. I tried to imbue the novella with the same soft grey-green light that’s indicative of the land. The Burren holds a large part of my heart, in fact, I’d go as far as to say it’s my spiritual home.
* * * * *
Posted by Cait OSullivan at 12:49