today is another first for Cait's Place. I was lucky enough to catch a few moments of busy writer, D'Ann Lindun, to ask her a few things about writing and her fab new book, Desert Heat! Thanks D'Ann, and everybody else -- enjoy :) 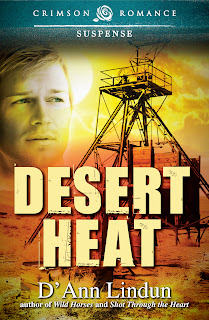 Mallory James doesn’t trust men. How could she when her own father abandoned her twenty-two years ago? Now, when she receives a phone call from a man claiming to have found the body of her father in the Arizona desert, Mallory has no way to find out the truth. For closure, she flies to Phoenix to claim the body.

Mike Malone has more trouble than he knows how to cope with. An environmental group, the Salt River Protection League has gotten an injunction that prevents his guest ranch from operating. Tired of the battle, his longtime girlfriend has left him, and his friends—all depending on him for their livelihood—are getting desperate. The last thing he needs is the body of desert rat, Skeeter James, in one of his vacant cabins. And Mike really doesn’t need a beautiful woman taking his mind off business.

The minute Mallory reaches the deserted guest ranch things seem odd. Mike’s friends aren’t welcoming, and one in particular, Diana, seems to want Mallory gone. A vial of gold and half a treasure map are the only legacy Skeeter leaves. Before she can have the burial, Mallory is lured into the desert, bucked off a horse sabotaged by a thorn under his saddle blanket and stalked. Although she is falling for Mike, she can’t love a man she can’t trust. At first, Mike is skeptical of Mallory’s claims, but as incidents begin to pile up, he is forced to admit someone is trying to hurt. But how can they stop what they don’t understand?


That's certainly got me hooked -- and I love the cover, nice one. So tell me all:

Why did you begin writing?
It wasn't until my BFF and cousin and I all took a course from Margot Early that I thought I might be able to actually do it.

What is the best thing about being a writer?
Bringing characters to life!

What is the worst thing about being a writer?
The uncertainty and doubt that haunts us all.

Do you ever suffer writer’s block and if so, what do you do about it?
No. I don’t believe in it. I think it’s an excuse that writers use to not write. I think you can fight through any scene if you try hard enough. That being said, I sometimes do have a hard time getting motivated to get something done.

Where in Desert Heat is your favourite scene set?
At some petroglyphs that Mallory finds. It’s a true location from my childhood. She is beginning to solve the mystery, when another one opens up here.

Showing off my ignorance here in London, what are petroglyphs?
Rock art carved by Native Americans.

How does Mallory smell?
LOL hmmm….Like a desert flower.

How does Mike (my personal favourite LOL) smell?
Easy one, he’s born and bred in the Arizona desert, so sun.
YUM!

How do you manage your writing day?
I don’t. I work retail, and it depends on my schedule there and how I feel on my days off. I prefer to write late at night, but that and getting up early don’t mix for me.
Sounds like hard work to me, but great you can write late at night!

What are you working on now?
3 stories—a man and a woman who are finding their way back together after the stillbirth of their son; a SAR member and a mercenary on a mission to save an Arab sheikha; a small town sheriff and an undercover FBI agent, both trying to catch a serial killer.

If you could live anywhere in the world, where would it be and why?
Right here! My family is here, so are my animals. I sometimes would like to spend winters in Phoenix, as I did as a child, but not right now.
I spent a couple of weeks in Phoenix and loved it too.

Now, (nothing whatsoever to do with my Come Along and Guess the Song blog) what music do you listen to? Do you find it helps to play music when writing?
I don't really like to listen to music a lot. I'm hard of hearing in my right ear, and it sometimes grates on me. But when I'm in the mood, I like classic country or rock.

Okay I shall bear that in mind in future blogs :). Can we have an excerpt please?

At the boulders overlooking the ranch, she dismounted and tied Zorro to a palo verde branch. She gave his neck a quick pat and turned to admire the view. Sitting back on her heels, she studied the land. No one seemed to be around on the ranch, so she lifted her face and looked into the distance. Even the brown cloud over Phoenix was less today. The Superstitions looked like rolling green hills, thanks to the rain. From here she could almost see to Mexico.  She noticed Canyon Lake in the distance and where Tortilla Flat should be, but she couldn’t see it from here.
Nothing jumped out at her, so she stood and moved to the rock with the Native American drawings. Tracing her fingers over the rough surface of the rock, she didn’t see anything she knew. A stick figure looked like a man, and another figure might’ve been a horse or a mule. But she wasn’t sure. Some symbols resembled letters, but she didn’t read Apache or whatever language they were written in.
Closing her eyes, she traced the marks again.
Her fingers slid over rough granite, but nothing struck her.
Something here had drawn her back, but what? Just the mystique of the characters? No, it was more. She opened her eyes and stepped back.
Then she saw it.
The horse figure was on a trail.
Tiny scratches—hoof prints—that led nowhere.
Taking a closer look, she saw the horse stood upon a range of mountains that resembled the Superstitions. Heart racing, she turned and searched the horizon directly across from her. Yes, the exact location. Turning back, she searched the rock for another landmark. A single mark might’ve been Weaver’s Needle. She peered into the horizon, trying to remember if Mike had pointed that way. Yes.
One by one, she found other landmarks.
This boulder was an American Indian map.
It exactly matched the map Skeeter had.
Stepping back, she squatted down and drew the same map in the sand. The hoofprints were the missing clue. A short way across, they stopped. She nearly pressed her nose into the rock, trying to see where they led, but couldn’t find the rest. Time or the weather had worn them off. Certain the missing mine was there, she continued to stare at the stone until her head ached.           Mixed emotions filled her. Elation that Skeeter had been right warred with sadness that he hadn’t succeeded. Tears filled her eyes and fell down her cheeks and she made no move to wipe them away. She cried for her father, for herself.
She hadn’t vindicated him yet. She still didn’t know where the mine was.
Mike would.

Almost running, she untied Zorro and jumped on him.

Oooh fabulous writing, thanks D’Ann. Lastly, where can you be and Desert Heat be found?